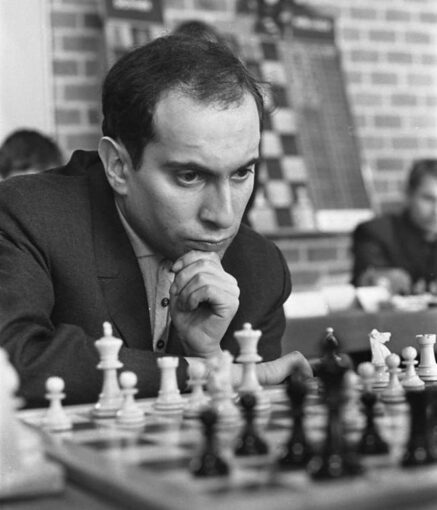 Mikhail Tal, a Soviet chess player was a Grandmaster and the 8th World Champion in chess. Also, he was the World Blitz Champion. Years of life: 1936-1992.

Mikhail was born in Riga to a Jewish family, on the 9th of November, 1936. His parents were cousins. Many researchers assume that it was the reason why he had a genetic disorder. The boy’s right hand only had three fingers.

Since childhood, he showed a unique intellectual capacity. At the age of 3, the future champion could already read. At 5, he easily multiplied big numbers, even three-digit ones.

When turned 7, the boy learned chess. He started to go to school and a chess club at the same age. Mikhail rapidly made progress. At 13, he already was a member of the Latvian national team. At 17, the young man won the Championship and became the strongest player in Latvia.

In 1953, Mikhail Tal had his first performance at the team Championship of the USSR. He took the 1-2 places on the table! Two years later, he won the semifinal game of the personal Championship of the USSR. This time, the player only took the 5-7 places. This was also a big success for a 20-year-old chess master. Overall, Tal won the championships of the USSR 6 times. It happened in 1957 and 1958 consecutively. Then, with interruptions, in 1967, 1972, and 1974. The last time was in 1978.

Mikhail wasn’t any less successful in international tournaments. Great examples are the World Championship among students in 1957, the Europe Team Championship, etc. There’s one particularly important achievement that opened the way to the Candidates Tournament. It was about 13,5 out of 15 points at the International Olympiad in Munich (1958). That appeared as the best result among all participants. Thanks to that, Tal was included in the Candidates Tournament of 1959.

It took place in Yugoslavia. The tournament included 8 players. Three of them were future World Champions, namely, Tal, Fischer, and Petrosian. And one was the Champion in the past (Smyslov). Eventually, Tal won with 20 out of 28 points, outperforming Keres with 18,5 points.

The World Championship between Tal and Botvinnik took place in Moscow. The unique thing about it was the contestants had never met each other before. So the event promised to be interesting. There were 24 games played, and the one with higher scores would win. Tal started from a victory. Then, there was a small series of draws. After that, Mikhail won two more games. Eventually, he won the match before the end with scores of 12,5-18,5. In terms of wins counted, it was 6-2.

The following year Tal had to defend the title. His competitor was Botvinnik again. However, the rematch didn’t go too well for Tal. His opponent showed amazing play and confidently won with a score of 13-8. Unlike the players’ first meeting, this one was very efficient. There were just 6 draws out of 21 games!

After that, Tal kept showing skillful play at the highest level. He took the first prize at the International Olympiad. In 1968, he reached the semifinal in the Candidates Tournament, where he lost to Korchnoi. In 1978, Mikhail won the USSR Championship for the 6th time. He was a vice-record-breaker there because only Botvinnik had more wins in such tournaments. In 1988, Tal proved his superiority at the World Championship in blitz chess.

After a long-standing disease, the player died in Moscow on the 29th of June, 1992. Without any exaggeration, Mikhail Tal is the brightest World Champion. He was known, mostly, for his combinational manner of play. It included lots of attacks, ventures, and sacrifices. He wasn’t just a chess genius. Now Tal is also a role model for those playing in a combinational style.